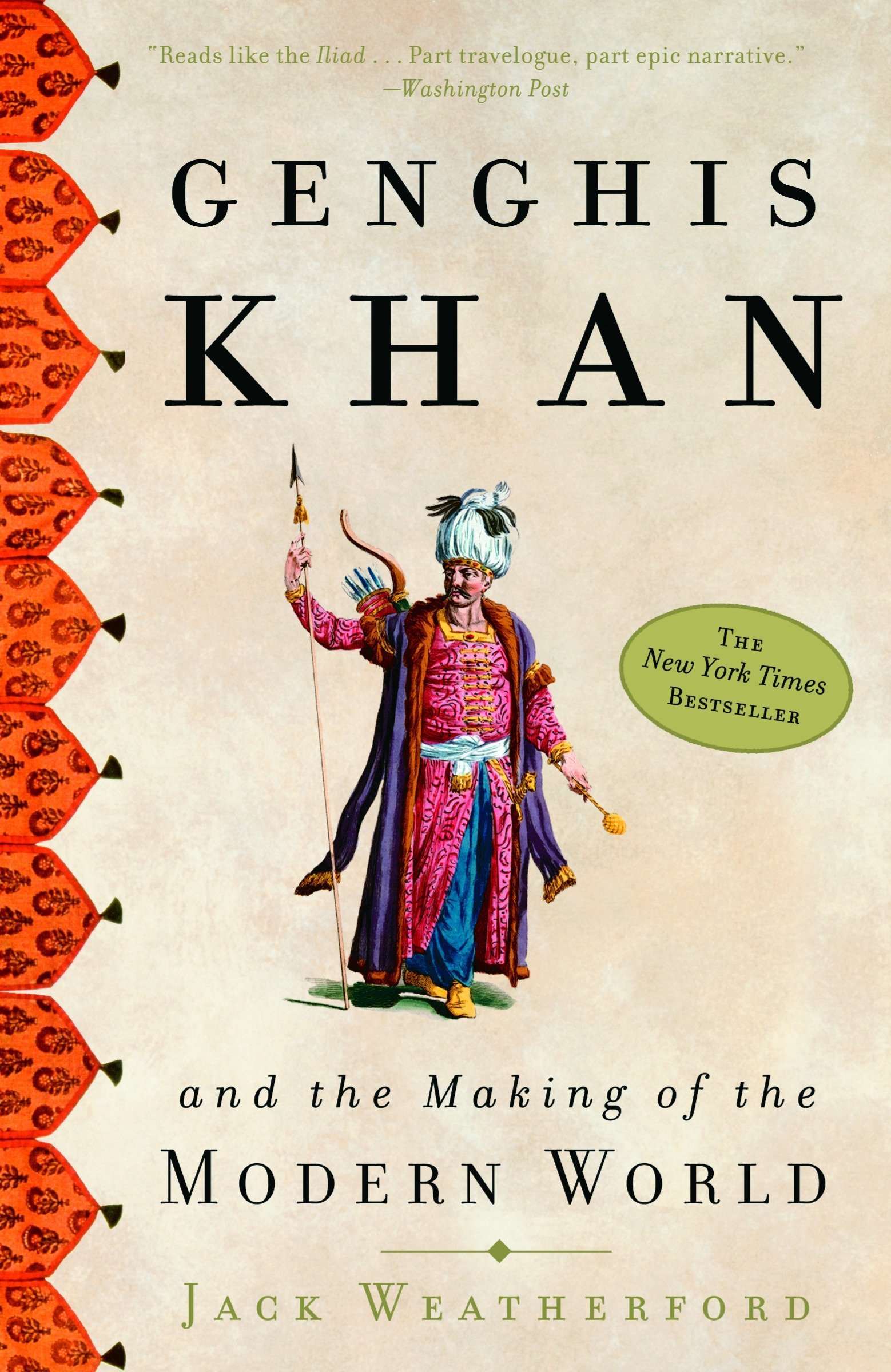 It could be said that Jack Weatherford was born to write a biography on Genghis Khan and his long-lasting legacies throughout human history. Having studied and lived extensively in Mongolia, he writes this biography with immersive imagination and vivid proses that a reader cannot help but feel as if they were in those historical scenes with the young, low-born Temüjin, a.k.a. Genghis Khan.

On the surface, this book can be regarded as an epic story encompassing a wide range of topics, such as history, warfares, empires, parenthood, and royal court struggles. Weatherford does not shy away from relying on The Secret History of the Mongols as a (un)reliable source for Genghis Khan's earlier struggles as a teenager and young adult for there was very little documentation in the steppe. Despite a lack of sources, we the readers are presented an engaging story full of fratricide, kidnapping, love, blood, drama, all of which make a great, entertaining fiction.

However, such a shallow reading would miss out on the deeper point that Weatherford emphasized throughout the book: Not only did Genghis Khan surpass many renowned Western figures, such as Julius Caesar and Alexander the Great, in the raw square meter of territory conquered, but his legacies to the entire world have often been too conveniently ignored by the Western narrative of world history.

This unfortunate and perhaps deliberate ignorance of Genghis Khan's legacy traces itself all the way back to medieval Europe, at the time a relatively poor and economically unattractive region to its potential Mongolian conquerers. The Mongols, who were already at the gate of Europe, retreated from Poland and Hungary and settled around modern-day Ukraine, known at the time as the Golden Horde. Having been prevented from warfare and instability like its neighboring Middle Eastern caliphs, Europe would end up benefiting from all the accomplishments and legacies that emerged from the flourishing trade and economic gains that came from stability established by the Mongol conquest without having been sacked like their eastern counterparts. Thereafter, the subsequent rise of European culture via the Renaissance and the Enlightenment ironically deemed Mongols and Genghis Khan as savages since most of them never interacted with the Mongols and thus had little document on this mysterious Asian people.

Weatherford argues that, in contrast to the savagery description by some Enlightenment philosophers such as Voltaire, Genghis Khan's rule of conquered territory was focused on law and order, fairness, stability, and economic prosperity. The Mongols secured previously dangerous trade routes that linked China via the Middle East and Africa all the way to Europe.

Mongol rule was so strict and effective that a "global" economy of commerce and trade emerged in Genghis Khan's empire. His descendants, who ruled over different regions, would grow up enjoying collecting goods and items from their relatives's territories, which highly resembles a globalized, connected economy that we enjoy today. In Khanbaliq, which would later become Beijing, Chinese, Arabs, Jews, Persians, Mongols, Genoese, and other people would trade. It was truly a scene of "globalization" never seen before, all united under one big blue sky.

While Genghis Khan's contemporary European rulers enjoyed torture as a technique on both the innocent and guilty, the Mongols detested torture and disfigurement as treatment of their fellow humans. In some sense, the "barbaric" Mongols were much more enlightened than their "civilized" European fellows. When reading Weatherford's account of this history, one cannot help but wonder how twisted the interpretation of history from a Christian perspective can be if it took such great liberty in turning a civilized society into fictional inhuman savages.

Perhaps more surprising of all, different religions were tolerated by the Khan of Khans so long as the believers put the Khan, or in modern terms, the state, before their Gods, the religion. Though it may not be a clear separation of state and religion, Genghis Khan's treatment of religion in his empire was remarkably progressive in political terms. Rebellions under the name of a specific God would be brutally crushed but in the court of the Mongol Khan, people of different cultures and religious backgrounds thrived on their merits and competence, not their race or ethnicity.

In contrast to the stereotypical image that wherever the Mongols went, they ransacked towns and cultures, in reality the Mongols improved not only military tactics but led the spread of technology and progress wherever they went. For instance, they brought Chinese herbalists to Persia and Persian physicians to China. They revolutionaized gun powder warfare and spread it westward. Moreover, the Mongols unified regions that still share roughly the same territories today: Song dynasty merged with the north as well as Tibet and the land of Uighurs, which roughly resembles modern day China; Persian culture saw a resurgence under Mongol rule; the self-claimed descendants of the Mongols ruled India as the Moghuls; the Golden Horde influenced Russians and Ukrainians both culturally and politically. Interestingly, "hurrah", a popular bravado commonly seen across European and Anglo-Saxon countries, was originally borrowed from the Mongols. The negative term "mogul" also carries its origin from "Mongol".

While Genghis Khan constantly reminded himself that he should not forget the way of the Mongols, he failed in terms of parenthood and was not particularly a good father, whose prolonged absence from home led to disunity among his sons (though in his other book The Secret History of the Mongol Queens he illustrates the brilliance of Genghis Khan's daughters). His sons and grandchildren, in turn, not only enjoyed in-fight over territories and titles, but also gradually forgot the way of the Mongols and became sedentary and assimilated into the cultures from the territories they ruled. It was known that the great Khublai Khan, a grandson of Genghis, was overweight, could not ride a horse for hunting, and was regarded by fellow Mongols as enjoying the Chinese way of life more than a Mongol should.

While the divided Mongol Empire continued after Genghis's death and functioned for another century or so, what finally brought the Mongols down was a deadly disease called Black Death that ironically, like the Covid, originated in southern China. Empires, regions, provinces, cities all suffered population loss or locked themselves in to manage the spread of the disease. Global trade suffered and stopped, and the Mongol rulers had to gradually adopt the religions of their territories to appease the discontent population that was Arabic, Persian, Chinese, or Slavic.

And so, a vast empire that started with one young Temüjin who was forced by his bitter life to protect his own family, this same empire was finally brought down by an invisible virus that wiped out a large chunk of the human population. History, glory, life, and fate seem so random and ephemeral yet ever-lasting all at once.

The Soviets cracked down brutally on Mongolians who held on to the history of Genghis Khan. Not only were intellectuals and civilians murdered for studying or learning what was rightfully their nation's history, but the black sulde of Genghis Khan, a pole with circularly arranged horse hair that symbolized the soul of the great Khan, disappeared and was to be never found again. And so, with this not-so-brief and brutal blow from the radical viral ideology of communism, the last physical piece of item that belonged to Genghis Khan was gone from our world.

Thankfully, in a perhaps free and democratic corner of this earth, free from the deadly threats of a pandemic thanks to technology and privileged of the protection from Enlightenment values that had ties to the rise of the Mongols, some of us are lucky to enjoy Weatherford's entertaining and rich book on this historical figure so crucial to a small landlocked country's identity as well as the entire world's history.

Maybe we don't need to recover Genghis Khan's sulde. After all, his legacies are with us forever in our collective journey as the humankind.